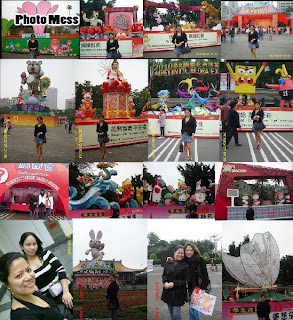 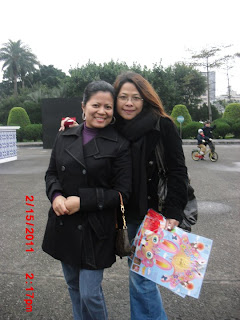 with Marites
I went to Dr. Sun Yat-sen Park to watch the Chinese Lantern Festival. It wasn’t my planned, but Yiyeh mentioned about the occasion. I called Ate Melba but due to her work schedule she couldn’t joined me. I decided to have an adventure alone. While I was busy taking pictures someone called me, “ Gemma is that you?” I couldn’t remember her, I tried not to sound impolite but I really had no clue. Then, she embraced me so tight, (of course I was being irrational to think that the woman was crazy) Wait, “who are you?” Did I meet you before? Yes, I am Marites!” She talked too much, yet I couldn’t compose myself. Could you please tell me where did we met? (sinulat ko sa english para maintindihan ni Yiyeh, may request na bawat entry ko daw baka sa english) ^_^

Life is really full of surprises. Who would think after 7 years I will encounter her in unexpected moment and place. I also never thought that she will feel very thankful towards my gesture because it is not unusual to me. For me it’s merely doing something that appropriate in her burden. We had a snack in Mc Do, we talked about our lives and we promised to have a communication even thru text.

On the way home, I realized that in our simple action means a world to others. For us it doesn’t matter but for others it’s a matter of life and death. God really remind me to be compassionate not only to my friends but especially to stranger. Thank you Lord!
~~~~~~~~~~~~~~~~~~~~~~~~~~~~~~~~~~~
There are many different beliefs about the origin of the Lantern Festival, however, it is likely to have had something to do with celebrating and cultivating positive relationships between people, families, nature and the higher beings that were believed to be responsible for bringing or returning the light each year.

One legend tells us that it was a time to worship Taiyi, the God of Heaven in ancient times. The belief was that the God of Heaven controlled the destiny of the human world. He had sixteen dragons at his beck and call and he decided when to inflict drought, storms, famine or pestilence upon human beings. Beginning with Qinshihuang, the first emperor of China, after whom China is named, all the emperors ordered splendid ceremonies each year. The emperor would ask Taiyi to bring favorable weather and good health to him and his people.

Wudi of the Han Dynasty directed special attention to this event. In 104 BCE, he proclaimed it to be one of the most important celebrations and the ceremony would last throughout the night.

Another legend associates the Lantern Festival with Taoism. Tianguan is the Taoist god responsible for good fortune. His birthday falls on the fifteenth day of the first lunar month. It is said that Tianguan likes all types of entertainment, so followers prepare various kinds of activities during which they pray for good fortune.

Another legend associates the Lantern Festival with an ancient warrior name Lan Moon, who led a rebellion against the tyranical king in ancient China. He was killed in the storming of the city and the successful rebels commemorated the festival in his name.

Another legend about the origins of Lantern Festival involves a maid named Yuan-Xiao. In the Han Dynasty, Mr. Eastern was a favorite adviser of the emperor. One winter day, he went to the garden and heard a little girl crying and getting ready to jump into a well to commit suicide. Mr. Eastern stopped her and asked why. She said she was Yuan-Xiao, a maid in the emperor’s palace and that she never had a chance to see her family since she started working there. If she could not have the chance to show her filial piety in this life, she would rather die. Mr. Eastern promised to find a way to reunite her with her family. Mr. Eastern left the palace and set up a fortune-telling stall on the street. Due to his reputation, many people asked for their fortunes to be told but every one got the same prediction – a calamitous fire on the fifteenth lunar day. The rumor spread quickly.

Everyone was worried about the future and asked Mr. Eastern for help. Mr. Eastern said that on the thirteenth lunar day, the God of Fire would send a fairy in red riding a black horse to burn down the city. When people saw the fairy they should ask for her mercy. On that day, Yuan-Xiao pretended to be the red fairy. When people asked for her help, she said that she had a copy of a decree from the God of Fire that should be taken to the emperor. After she left, people went to the palace to show the emperor the decree which stated that the capital city would burn down on the fifteenth. The emperor asked Mr. Eastern for advice. Mr. Eastern said that the God of Fire liked to eat tangyuan (sweet dumplings). Yuan-Xiao should cook tangyuan on the fifteenth lunar day and the emperor should order every house to prepare tangyuan to worship the God of Fire at the same time. Also, every house in the city should hang red lantern and explode fire crackers. Lastly, everyone in the palace and people outside the city should carry their lanterns on the street to watch the lantern decorations and fireworks. The Jade Emperor would be deceived and everyone would avoid the disastrous fire.

The emperor happily followed the plan. Lanterns were everywhere in the capital city on the night of the fifteenth lunar day. People were walking on the street. Fire crackers kept making lots of noise. It looked like the entire city was on fire. Yuan-Xiao’s parents went into the palace to watch the lantern decorations and were reunited with their daughter. The emperor decreed that people should do the same thing every year. Since Yuan-Xiao cooked the best tanyuan, people called the day Yuan
(from Wikepedia )