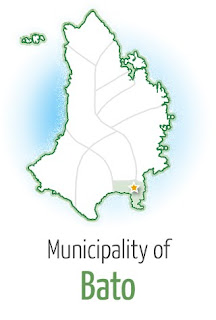 Bato, the smallest of the eleven (11) municipalities of Catanduanes has a land area of 48.8 sq. km. or 4,880 ha. It is situated along the eastern coast of Bicol Region. It lies on the Southern Part of the storm tossed island province. A 5th class municipality and with a population density of 321 persons per square kilometer, it has a total population of 17,761 as of 2000. 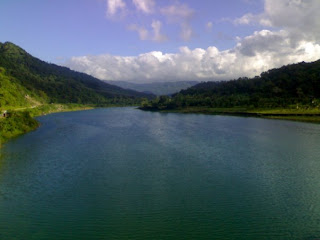 To prevail on this small strip of predominant agricultural land, the Batonhon has thought himself to be practical. She has resolutely formed an alliance with the typhoon-beaten soil to gain her education, which can serve as a passport to better life in which better life cannot be offered by agriculture alone. Education has to play its part, proof of which the town has produced an unsurpassed number of Professionals of the different fields of expertise. 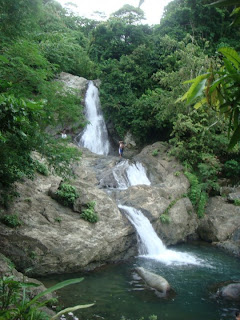 (the famous Maribina Falls in our town, i remembered vividly the memories during my high school years)

As you look around the foliage of the hills and mountains, the ebbing tides of the river, the swamps and blue-green sea, the valleys, precipice and cloudy blue sky, one would reflect that it is indeed inevitable for a resourceful Batonhon not to move on and seek a broader prospective venture elsewhere or abroad. 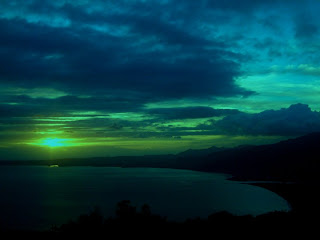 Little is known about the existence of Bato in the early part of the 13th century. It is believed however that on the basis of language peculiarities spoken by the natives, the early settlers were muslim traders from Surigao, traders who were previously immigrants from Borneo and Malaysia. They settled near the shore of Batalay for protection against external threats, and for communal needs, people lived together inn groups with elected leaders. Some of this group retreated from the shores and settled near the Bato River. 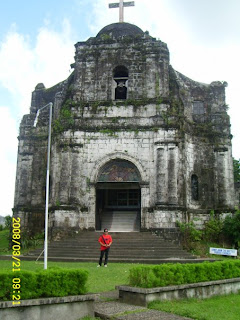 (me at St. John the Baptist Church, the historical and oldest church in Region V)

THE BIRTH OF HISTORICAL LAND MARK: (THE HOLY CROSS OF BATALAY)

Through a significant twist of destiny, Bato incidentally became an important stage in the drama of Philippine History with Fray Diego de Herrera as the main character. Fray Diego de Herrera was a missionary from Toledo Spain. In Philippine history, he is known as one of the members of the expedition as Miguel Lopez de Legaspi and as one of the first priests who came to Manila between 1571 to 1572, said the first mass and became the founder of the monastery of San Agustin, the eldest church of the country. 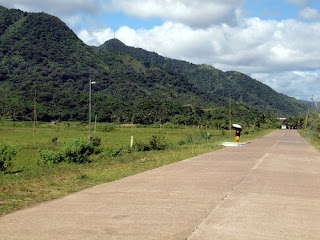 Located at the Southeastern cost Catanduanes is a reef called Nagngagang Buaya which is linked by traditional with the place where a Galleon Espiritu Santo taken by Fray Diego de Herrera and nine other companies which embarked from Mexico suffered ship wreak on April 25, 1576 on their way to Cebu because of the negligence of the pilot of the ship and bad weather. According to Rev. Icacio Rodriguez, says that all the survivors were preened by the natives of the island, however, had they met an instant death, the story not have been completed. Mariano Goyena del Prado in his testimony says that the survivors were stranded in Batalay, a native “balangay” located at the Southern tip of the town of Bato, Catanduanes, where they were given shelter and provisions by the ruling datu. This testimony is closed to the belief of Batonhon that Fray Diego de Herrera lived for some days in Batalay and suffered martyrdom in the hands of the natives because he tried to introduce catholic religion, which the native did not accept. Tradition has it on the burial place of Fray Diego de Herrera where the Spanish companion planted a wander cross, a spring of clear water sprouted, which the natives regarded as an unusual phenomenon. 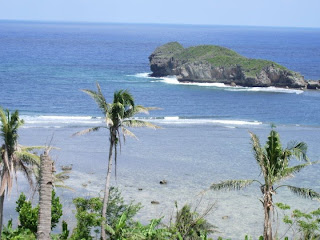 (crocodile island in our town)

Again tradition says that the death of Fray Diego de Herrera brought supernatural punishment to the natives for killing a holy man. The punishment was in the form of school of swordfish, which attacked and killed many of the natives. The survivors retreated inland, some finally settled near the Bato River and the others went back to Batalay after the incident.

After many years, From 1840 to 1860, Bishop Grijalvo of Nueva Caceres ordered a moment to the constructed over the grave of Fray Diego de Herrera, the site of which could not be located. It took many attempts to plant a cross on the right spot because no cross would stand, it was noted to be uprooted every sunrise, when finally one morning the cross did not fall to the ground that caught the natives in surprise, the natives dug beneath where the cross stood and found a human skeleton supposed to be the remains of famous martyr. From then on pilgrims placed it on the pained parts of the body, others brought with them oil and many came with empty bottles to be filled with the miraculous water from the spring. To protect the cross from further destruction, it was encased with hard wood. Presently, it is on the altar of the Holy Cross of Batalay Chapel where it is venerated throughout the year.

On April 21, 1973 on the occasion of the fourth Centennial Celebration of the death of Fray Diego de Herrera, a decree was signed by the Most Rev. Teotimo C. Pasis C.M. Bishop of Legazpi, declaring the Holy Cross of Batalay a Diocesan Shrine with the right to hold a Liturgical celebration on the last Friday of April of every year. Thus, Batalay, Bato, Catanduanes become a historical landmark. 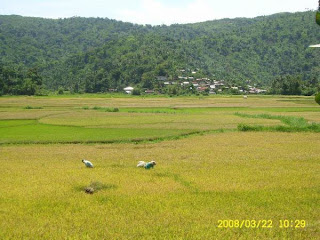 (my family during harvest time, near our house. taken during my 2008 summer vacation )

THE ESTABLISHMENT OF THE PARISH

Although it was in Batalay, Bato, Catanduanes that the first seed of Christianity was planted by Fray Diego de Herrera, the spread of Christian religion in the place was slow, this was due to the refusal of the natives to an abrupt renunciation of their ancestral faith, Moreover, the establishment of Parishes in Catanduanes begun in the North.

When the first priest was assigned in Bato, who was a certain Father Reymundoo, he constructed a temporary chapel with the help of the natives. They selected a Patron Saint appropriate to the Parish’s location and need. St. John the Baptist preaches the carrying of the cross and the parish significantly produced the highest number of Priests and religious people among the parishes in the province in proportion to the number of population.

Today the monumental church with unique architectural design dignifies the town. Its façade brings back the memory of the old times when our forefather, in the spirit of Bayanihan, toiled like ants until each brisk adhered together and form the massive high walls, the tower contained the legendary bell. Proudly the church stands as the oldest in the province and a tourist attraction.

THE ORIGIN OF THE TOWN’S NAME

When the Spanish conquistadores led by Juan de Salcedo set foot in Catanduanes in 1575, Bato remained for a time unexplored. However, during the Hispanization of the Philippines, the Governadorcillo ordered that all settlements must have their names registered, together with the data on population and estimated taxes due the king of Spain.

It was on this purpose that local Spanish official went around the Villages of Catanduanes. The Spanish officials assigned to this place asked a woman who was washing clothes in the natural stone well, the name of the settlement. She thought that Spaniard was asking the name of the well, so she answered “Bato” which the Spaniard recorded and reported as the name of one the setios of Virac.

So there, the place was called Bato until after it became full pledged municipality in 1896. Being strategically located at the bank of the river with only a few kilometers away from Cabugao Bay contributed to Bato’s becoming a municipality. However the Alcalde Municipal was appointed in 1898.

The people of the newly crated municipality fought brawly with the Spanish guards with Capitan Diego as the head of the Surrectus and General Brumbuela as the commanding Officer who took charge of Virac, Calolbon and Bato. The fighting continued until after Philippine Independence was declared in Kawit, Cavite on June 12, 1898 because of communication gap.

When the Americans came during the year Philippine Independence was declared at Kawit, Cavite, the Batonhon who did not like to lose their hard earned-freedom went to the mountains and refused to recognize the American Administration. But the natives were easily convinced to put down their arms because of the Americans better knowledge of warfare and superior firearms. 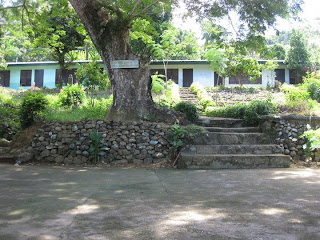 The natives found the Americans more democratic than the Spaniards. In 1904, the Bato Public Schools was founded. It was housed in the Tribunal with two (2) teachers from Albay and an American supervising them by the name of Ralp Robinson. Miss Maria Nogot handled class A, Mr. Torrebio Vibarde class B. Batonhon found the school need better than the Spanish convent school in terms of methods of insurance and school supplies. While the Spanish School forced children memorize cartilla, the Americans introduced practical knowledge through English Instructor with school supplies available for few. In 1908, Miss Juliana Tolledana, the first Batonhon to be trained in the methods of teaching, taught in the public school. Then in 1909, teachers were all residents of Bato. It was in 1914 that Catanduanes became district 2, a separate district of the division of Albay. 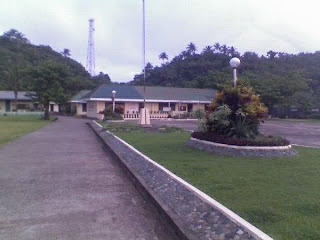 On December 12, 1942, two Japanese warships docked at Cabugao Bay. Several squadrons of warplanes flew over the skies of the Poblacion, Batalay, Cabugao and Virac. The Batonhon were able to evacuate to safer places with handy belongings. The Japanese eventually conquered Batalay despite of resistance of the natives.

Military government was organized in Bato after the fall of Bataan on April 9, 1942 and a Filipino Mayor served under the Japanese military command. In 1943, Atty. Basilio Soriano was appointed Major and the incumbent Major Ricardo Rojas was appointed as Provincial Governor by the Japanese Imperial Government until Catanduanes was liberated.

A guerilla forces was organize in Catanduanes with Major Salvador C. Rodulfo as the commanding officer and Bato as the official headquarter. Several encounters with the Japanese forces were happened somewhere in Mintay, Libjo, Virac, Gababang, Bato and in Banquerohan which is between Viga and Panganiban. In the early days of 1945, the Japanese garrison in Bato and Virac were cleared and Catanduanes was liberated of the heroism born out of the struggle for freedom.

After the liberation of Catanduanes in 1945, Vice-Mayor Moises Tarrobal assumed the position of the Mayor of Bato and restored the function of the commonwealth government until July 4, 1946 when the country gained independence from American control.

Today Batonhon found it wholesome to glance in a while to the glorious past and trace fine it the roots of greatness that the town has achieved.